Fats, oils, and greases (FOGs) are by products of cooking. FOGs stick to the inside of sewer pipes, eventually clogging sewer lines and causing sewage backups and overflows.

Food service establishments (FSE) that generate FOG can cause significant problems in the public sewer system and are required to have adequate grease control devices (e.g., grease traps and interceptors) and may face fines for creating blockages and overflows in the public sewer system. This is where MarBorg Industries’ Liquid Waste Division (LWD) comes in. MarBorg’s LWD is a state-licensed Industrie’s grease trap and interceptor waste hauler serving the Santa Barbara area. Grease traps are pumped, cleaned, and the waste is manifested to ensure legal disposal. The FOGs from the control devices are delivered to MarBorg’s receiving station, where they are screened and stored.

In 2013, the City of Santa Barbara developed its anaerobic digester conversion grease to gas&quot; program, which utilizes selected FOGs from area restaurants. The City entered into a partnership with MarBorg to deliver FOG liquids to the El Estero Water Resource Center (El Estero). MarBorg’s prescreening and pretreatment system benefits El Estero by providing a consistently high-quality product, allowing for an increase in biogas production. 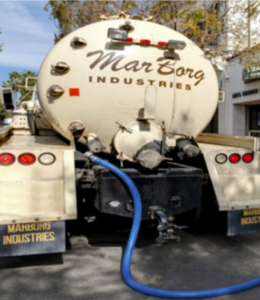 With MarBorg’s FOG receiving station being located less than one-half mile from El Estero, this partnership has improved MarBorg’s sustainability efforts as well as providing real savings from reduced hauling and disposal costs for FOGs. There is also a reduction in greenhouse gas emissions from digesting instead of disposing of FOGs at landfills.